CORPUS CHRISTI, Texas, June 2, 2014 - Stripes® and Laredo Taco Company® are proud of their customers and employees for surpassing their goal of raising $1 million for Children's Miracle Network Hospitals during their 10th annual Miracle Balloon icon campaign from March 31 to April 27. Stripes Stores raised a total of $1,177,804.27 in more than 580 store locations, which will flow directly to 13 member children's hospitals throughout Texas, Oklahoma and New Mexico. 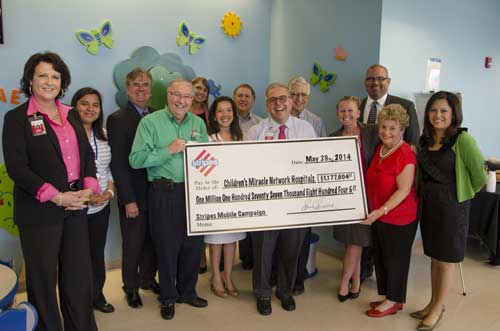 Stripes Stores employees asked customers to Put Their Money Where The Miracles Are and purchase a $1 Miracle Balloon icon to raise funds for Children's Miracle Network Hospitals. Each customer donation was rewarded with a free 12-ounce Slush Monkey® and a buy-one-get-one free Smokin' Barrel® snack promotion. The $1,177,804 is a 24% increase over last year's fundraising total; in all, Stripes Stores has raised almost $5 million for Children's Miracle Network Hospitals through its partnership.

"What an honor it is to present more than $1.1 million to Children's Miracle Network Hospitals," said Sam L. Susser, Chairman of the Board of Directors and Chief Executive Officer of Susser Holdings Corporation (parent company of Stripes LLC), at a check presentation ceremony to representatives from CMNH. "Together, with the support of our generous customers and our passionate team members, we surpassed our highest expectations. The grand total of this campaign will impact 13 different pediatric hospitals in our Stripes communities and they will be able to offer more hope and healing for many children. They are the true Miracle Makers."

As with all Children's Miracle Network Hospitals fundraisers, dollars generated from Stripes in-store campaigns stay local to benefit sick and injured kids in the community in which funds were raised. These funds help create miracles by funding medical care, research and education that saves and improves the lives of millions of children treated at Children's Miracle Network Hospitals each year.

"We are so thankful for Stripes Convenience Stores for another record-breaking fundraising year," said John Lauck, president and CEO of Children's Miracle Network Hospitals. "Funds generated through these annual campaigns provide life-saving care and needed treatments for 13 of our member children's hospitals. These donations are vital for hospitals to continue to provide the best possible medical care for sick and injured kids."

Headquartered in Corpus Christi, Texas, Susser Holdings Corporation (NYSE: SUSS) is a third-generation family led business with over 1,240 company-operated or contracted locations.  Susser Holdings is the parent company of Stripes® Convenience Stores and owns the general partner of Susser Petroleum Partners, LP. (NYSE:  SUSP).  Susser Holdings ranked No. 460 on the FORTUNE 500® for 2013.  The Company operates approximately 634 convenience stores in Texas, New Mexico and Oklahoma, over 580 under the Stripes® banner and 47 under the Sac-N-Pac banner.  Restaurant service is available in over 400 of its stores, primarily under the proprietary Laredo Taco Company® brand.  The wholesale division distributes approximately 1.6 billion gallons of motor fuel annually to Stripes® stores, independently operated consignment locations, convenience stores and retail fuel outlets operated by independent operators and other commercial customers in Texas, New Mexico, Oklahoma, and Louisiana.  For more information about Stripes® Convenience Stores visit www.stripesstores.com and www.facebook.com/stripesstores.

Children's Miracle Network Hospitals® raises funds and awareness for 170 member hospitals that provide 32 million treatments each year to kids across the U.S. and Canada. Donations stay local to fund critical treatments and healthcare services, pediatric medical equipment and charitable care. Since 1983, Children's Miracle Network Hospitals has raised more than $5 billion, most of it $1 at a time through the charity's Miracle Balloon icon. Its various fundraising partners and programs support the nonprofit's mission to save and improve the lives of as many children as possible. Find out why children's hospitals need community support, identify your member hospital and learn how you can Put Your Money Where the Miracles Are, at CMNHospitals.org and facebook.com/CMNHospitals.