Beginning on National Taco Day, Stripes® will randomly award four lucky entrants with Free Laredo Taco Company breakfast tacos to finish off 2014! Customers interested in participating in the promotion may visit the Stripes Facebook page at www.facebook.com/stripesstores to upload a picture of themselves eating a taco on Saturday, October 4, 2014, before 11:59PM. Four winners will randomly be selected and announced on Monday, October 6, 2014, on the Stripes Facebook page.

This past September 16th (el diez y seis de septiembre), Stripes launched a Facebook contest in search of the “Best Grito” (a Mexican shout culturally connected to Mexican Independence Day) for a chance to win a $500 Stripes Gift Card in honor its new limited time only spicy chicken fajita taco named – EL GRITO. Facebook fans have the opportunity to choose their favorite contestant by voting for the best “Grito” on the Stripes Facebook page (Grito contest tab) now until tomorrow. The video with the most votes will win a Stripes® $500 Gift Card and FREE Laredo Taco Company lunch tacos for a month. The winner will be announced on the Stripes Facebook page on October 4, 2014 -National Taco Day. 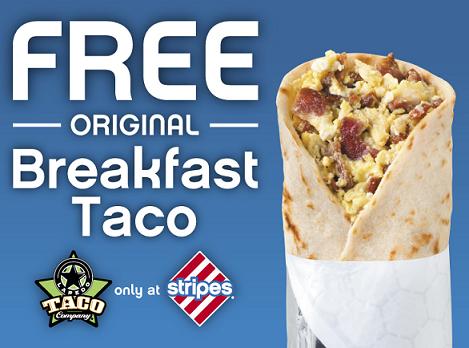 Coupon available on October 6-7, 2014 at www.facebook.com/stripesstores

About Stripes Convenience Stores
The Company operates over 630 convenience stores in Texas, New Mexico and Oklahoma, over 580 under the Stripes® banner and 47 under the Sac-N-Pac banner.  Restaurant service is available in over 400 of its stores, primarily under the proprietary Laredo Taco Company® brand.