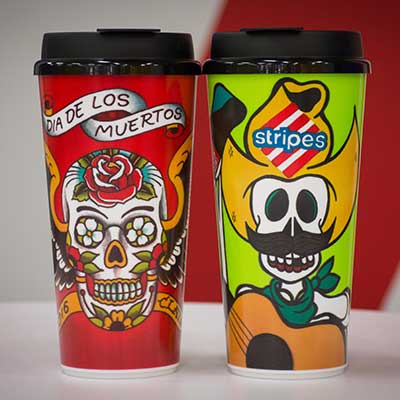 Both artists returned from last year to design the new 2016 commemorative cups. The artists were commissioned by Stripes Stores and Coca-Cola in 2015 to launch their first-ever project. Each artist was given the creative freedom to design their own interpretation of the Companies’ commemorative Día de Los Muertos cups. Gilp painted an original 16” by 20” piece and drew her inspiration from her South Texas roots using acrylic paint. Lain used watercolors to design his 8 ½” by 11” original pulling from the culture of calling South Texas his home. Each artist was asked to incorporate the Stripes Stores and Coca-Cola logo on their design.