Stripes® Stores to Release Two New Limited-Edition Selena Commemorative Collectible Cups for Stripes Customers and Selena Fans at Its Stores Across Texas and Louisiana on Saturday, April 7, 2018 at 9 a.m. 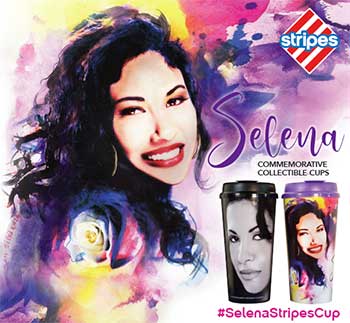 (Dallas, TX) Monday, April 2, 2018 – Stripes® Stores is proud to announce the release of two new limited-edition and limited-release Selena Commemorative Collectible cups that will be sold across Stripes stores in Texas and Louisiana on Saturday, April 7, 2018, starting at 9 a.m. Stripes took to its Facebook page this morning to release a video featuring the 2018 Selena cups along with information for Stripes customers and Selena fans on when and where to purchase the limited-edition Selena cups, including a limit of four cups per person. Customers and Selena fans may begin to line up at Stripes for their chance to purchase a cup at 8 a.m. on Saturday prior to the 9 a.m. release time.  The cups will be priced at $2.99 and will be available while supplies last. Like last year, portions of the cup sales will benefit the Selena Foundation.

“I am excited to work with Stripes again on these beautiful commemorative cups of my sister featuring Selena’s image. One of the designs this year is a watercolor painting created by New York artist Santi Siguenza, and it’s also our official logo for the 2018 Fiesta de La Flor event,” said Suzette Quintanilla, CEO of Q-Productions.

The black and white cup with a black lid features a close-up of Selena’s face with her logo in red and her signature white rose. The water-color cup with a purple lid is a commissioned art piece designed by New York artist San Sigü Enza and was created especially for the 2018 Fiesta de la Flor event. Each cup features the Stripes and Fiesta de la Flor logo and is BPA free.

“We are honored to work once again with Selena’s sister, Suzette Quintanilla, on the design and release of the 2018 Selena Commemorative Collectible Cups. Our customers are some of the most loyal Selena fans in the world and these cups are a unique way to show our support and love for Selena. Our customers and Selena fans will be able to buy the Selena cups at Stripes beginning on Saturday, April 7th at 9 a.m.,” said Greg Kirian, Director of Marketing for Stripes.

Stripes is a founding sponsor of Fiesta de la Flor (FDLF), a two-day event held in Corpus Christi, Texas, honoring the life and legacy of Selena Quintanilla. Selena fans will have another opportunity to purchase the 2018 Selena Commemorative Collectible Cups at the Laredo Taco Company food trailer located at Stripes La Plaza within the event grounds, while supplies last. The limit is one cup per customer at FDLF. The event is scheduled for Friday, April 13 and Saturday, April 14 in Selena’s hometown. Stripes is encouraging its customer to visit the Stripes Facebook page for updates and information on the sale of the Selena cups both at Stripes and FDLF. #SelenaStripesCup is the official hashtag.

“We love working with Stripes, our fabulous partner and are delighted that fans have a chance to add these two beautiful cups to their Selena collections,” Paulette Kluge, CEO of the Corpus Christi Convention and Visitors Bureau.

The 2018 Selena Commemorative Collectible Cups are a limited-edition, limited-supply item and Stripes officials are expecting the cups to sell out quickly. Customers are encouraged to review the Selena Cups FAQS regarding the release and sale of the cups, the FAQS can be found here www.stripesstores.com/SelenaCupsFAQs.

About Stripes® Convenience Stores
Stripes Convenience Stores operates more than 525 convenience stores in Texas and Louisiana. Restaurant service is available in over 450 of its stores, primarily under the proprietary Laredo Taco Company® brand. Stripes is owned by 7-Eleven, Inc. ("7-Eleven"), the largest chain in the convenience-retailing industry. Based in Irving, Texas, 7 Eleven operates, franchises and/or licenses more than 65,000 stores in 18 countries, including 11,600 in North America.  For more information about Stripes Convenience Stores visit www.stripesstores.com. Media Contact: Jessica Davila-Burnett, 361-290-3257