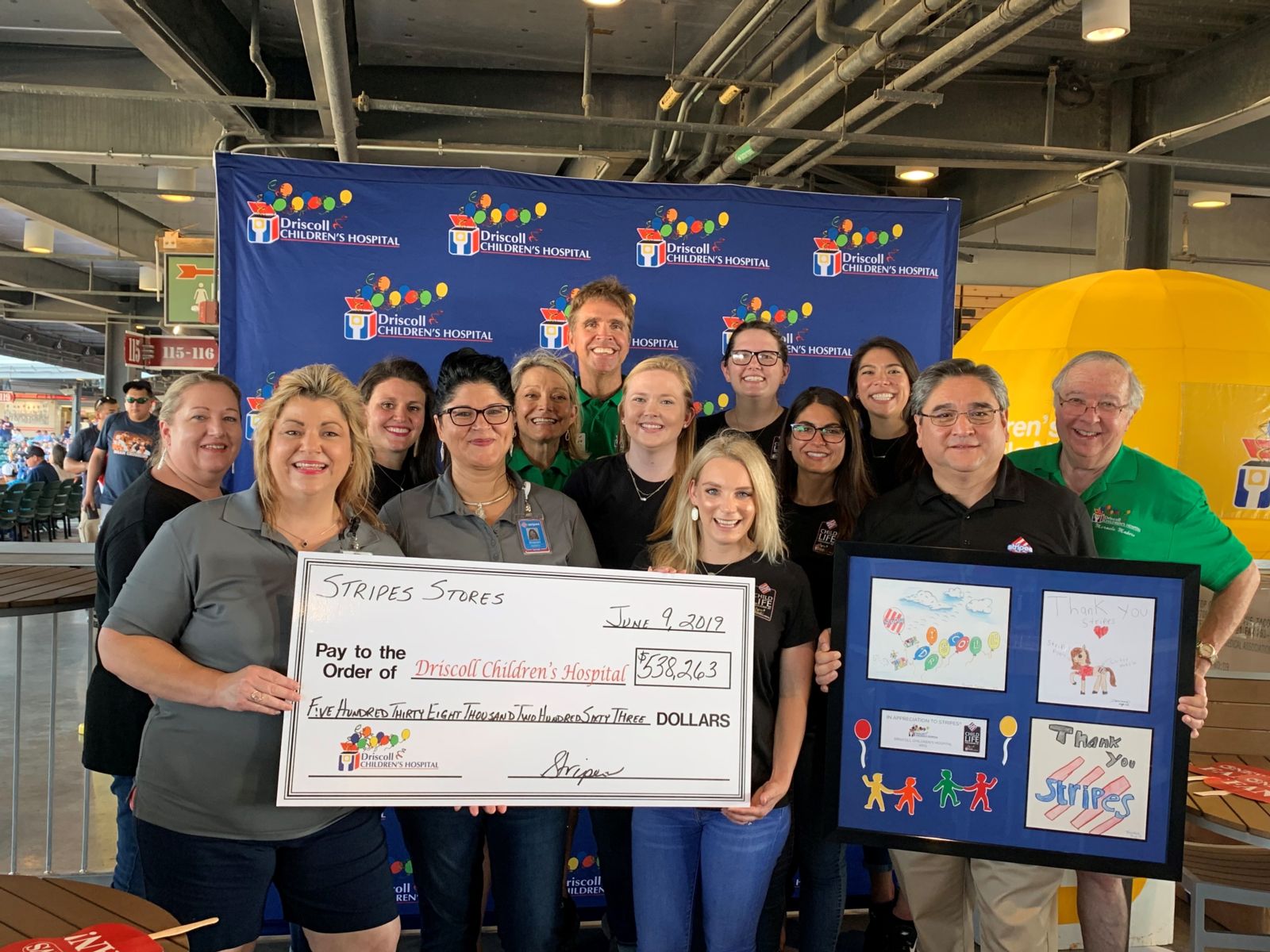 IRVING – Stripes® Stores raised more than $530,000 through its in-store charitable fundraising campaign for Driscoll Children’s Hospital (DCH) to benefit the children and youth of South Texas.

From April 22 through May 19, Stripes Stores in South Texas gave customers the opportunity to donate $1 to raise funds for Driscoll Children’s Hospital, which serves patients from all over South Texas and beyond. The funds also benefited DCH specialty clinics in Victoria, the Rio Grande Valley, Laredo, Eagle Pass and Del Rio. In return for Stripes customers’ generosity, each donor received one Driscoll Children’s Hospital “I Donated” mobile icon with a $1 off coupon for a 1-liter bottle of DASANI® water.

Stripes officials made the gift of $538,263 to Eric Hamon, President and CEO of Driscoll Health System, at a check presentation in Corpus Christi on Sunday, June 9.

“This year celebrates the twentieth anniversary of Stripes’ partnership with Driscoll Children’s Hospital and the tenth anniversary of supporting the Stripes Child Life Program in satellite clinics, specialty centers and in the hospital,” stated Brad Williams, Senior Vice President, 7-Eleven, Inc. (Stripes Stores). “We are incredibly grateful to our team members and generous customers as they continue to support children and youth in our communities throughout South Texas.”

“We would like to thank all the wonderful Stripes customers and employees who were so generous to help raise needed funds for the children of South Texas who require medical care here at Driscoll Children's Hospital,” said Richard Harris, Development Specialist – Coastal Bend for Driscoll Children’s Hospital. “The stores in the Corpus Christi area and surrounding communities recognize the importance of having a quality children's hospital like Driscoll here in their backyard. If not for Driscoll, people would have to travel long distances to get quality children's medical care.”

Stripes is known for their commitment to children and youth’s health and education programs in the communities where they operate. Stripes has been an outstanding collaborator and donor to Driscoll Children’s Hospital since 1999, giving back more than $4.3 million.

Improve the health of children and you give them their life.”

Driscoll Children’s Hospital is a 189-bed pediatric tertiary care center with more than 30 medical and surgical specialties offering care throughout South Texas, including Corpus Christi, the Rio Grande Valley, Victoria, and Laredo. Through the vision and generosity of its founder, Clara Driscoll, Driscoll Children’s Hospital opened in 1953, becoming the first, and remains the only, free-standing children’s hospital in South Texas. In 2018, Driscoll had more than 143,000 patient visits, including more than 43,000 patients seen at South Texas’ first emergency room created exclusively for children.

Stripes Convenience Stores operates more than 525 convenience stores in Texas and Louisiana. Food offerings are available in more than 450 of its stores, primarily under the proprietary Laredo Taco Company® brand. Stripes is owned by 7-Eleven, Inc., the world’s largest chain in the convenience-retailing industry. Based in Irving, Texas, 7-Eleven operates, franchises and/or licenses more than 67,000 stores in 17 countries, including 11,800 in North America.  For more information visit: www.stripesstores.com Media Contact: Jessica Davila-Burnett 361-290-3257